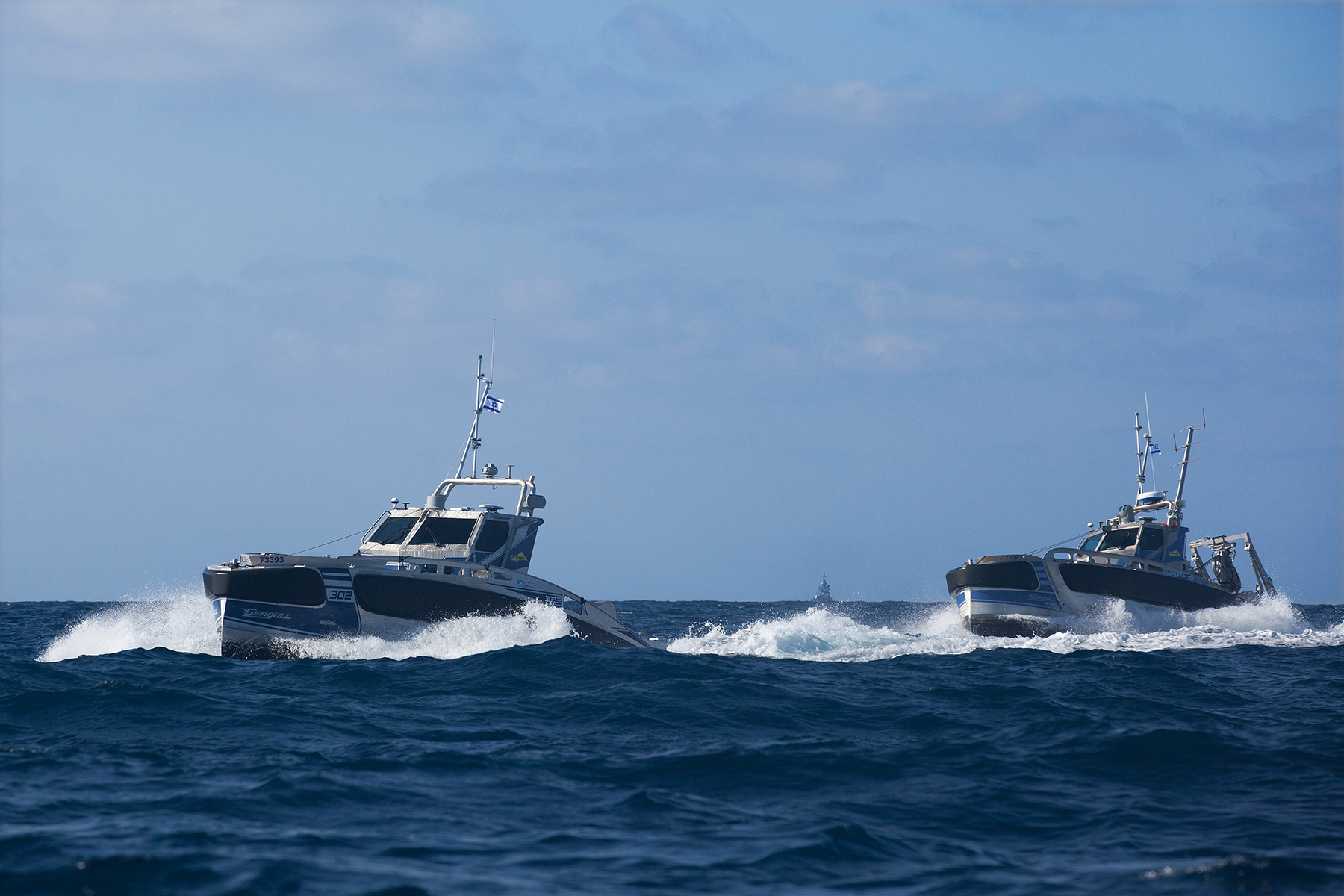 Unmanned platforms, from robotic vehicles on the ground to unmanned vehicles in the water and in the air, can provide additional capabilities in many areas of military operations. With a range of applications, they are used predominantly in protection and reconnaissance operations. The following scenario describes the protection of coastal waters and port areas as part of a military operation.

Insights from their own reconnaissance missions have enabled enemy forces to block access to a port using sea mines and thus threaten the safe passage of a maritime task force that is charged with safeguarding supplies for a nearby ground troops camp via the port.

Comprehensive security and extensive reconnaissance is carried out using Unmanned Surface Vehicles (USVs) and Unmanned Aerial Vehicles (UAVs) to detect and eliminate mine threats. Support from the ground troops in the camp is also needed in order to safeguard the supply routes.

This operational scenario gives a hint as to the increasing importance that unmanned systems will have in future: they will be used whenever it is deemed too risky for the military to deploy its own forces. Two SeagullTM USVs are therefore launched from one of the marine task force’s ships to search for hitherto undetected mines in at-risk areas of the port. Seagull™ was developed to be a flexible and modular component of maritime task forces for coastal waters and undertakes tasks in mine clearance and submarine hunting as well as electronic warfare.

The two remotely-controlled unmanned boats can operate fully autonomously:
the 12-metre long USVs can reach the endangered areas of the port independently and very quickly.  They are ideally equipped to detect, classify and clear the mine threat that is suspected here (bottom mines, moored mines and floating mines). Once the two USVs have reached their area of operation, one USV equipped with modular sonar systems (Forward Looking Sonar and Side-Scan-Sonar) searches the water and sea floor for suspicious, camouflaged objects that are hard to locate, while the other surface drone neutralises the objects using the Mine Identification and Destruction System (MIDS). The MIDS is controlled by an operator on board the mother ship. A predetermined area is automatically searched using an adapted algorithm. The USV is also equipped with Remotely Operated Vehicles (ROVs) that can detect, identify and classify mines using sensor technology.

Seagull™ can be deployed over large distances of up to 100 km and over a period of up to four days. The USVs also have a hot swap mode so they can replace each other and ensure continuous operation. Furnished with an automatic identification system, radar, cameras and communication equipment, SeagullTM behaves just like a conventional vessel. The units of the maritime task force communicate with the two USVs via data link (over distances of up to 20 nautical miles) and satellite communication over greater distances.

In summary, the deployment of the remotely-controlled surface drones shows that SeagullTM can be used to provide the sea-based, remotely-controlled capability of hunting for mines. This reduces the risk to the task force to an absolute minimum. It is also more cost effective over the long term as just one operator is needed to control several SeagullTM e.g. from the home port.

Unmanned systems on the ground and in the air

Meanwhile, an infantry platoon leaves the nearby camp and heads towards the port city: it is equipped with digital communication devices and modern night vision technology and is accompanied by Probot unmanned ground vehicles. The UGV (Unmanned Ground Vehicle) by Elbit Systems Deutschland performs a number of important functions here, such as the transportation of infantry equipment (e.g. ammunition and ordnance) and also serves as a weapons carrier for fire support. This increases the range as well as the operational capability and endurance of the soldiers. Its sensor equipment includes 360-degree cameras that can be used to explore the sometimes difficult terrain.

The approach of the infantry soldiers is also monitored by a Skylark I-LEX fixed-wing drone launched shortly after departure from the camp. With its powerful electrooptical sensor equipment, the UAV can survey enemy activity and provide high-resolution images in real time. As the drone produces no acoustic signal above a flight altitude of 100 m, it goes unnoticed while doing so.

Before reaching the outskirts, the infantry platoon receives the reconnaissance findings from the airspace of the port city in real time. The reconnaissance data on the covertly operating enemy forces can be forwarded using the TorchX Battle Management System to higher and lower ranks for assessment of the situation and decision making in real time. The ‘Sensor-to-Shooter cycle’ can thus be significantly shortened.

The infantry soldiers also deploy the small and inconspicuous VTOL drone MAGNI as a complement to this, which scans built-up areas in the port city for suspected enemy activity. The drone is launched and controlled by an individual soldier. Its electrooptic sensor technology, which can operate day or night, enables forces to explore poorly visible terrain between buildings. Use of the drone goes unremarked by the enemy as it only has a low optical and acoustic signature.

Using drones makes it possible to monitor the entire port city, search for opposing forces and react to sudden threats at an early stage.

Tactical success thanks to superior reconnaissance and autonomous protection

The port infrastructure deployment scenario benefits from unmanned systems in the water, in the air and on the ground. With their on-board payloads for communication, control/navigation and reconnaissance, they are critical to the success of the mission. They not only fulfil an important information, warning and protective function for the forces deployed, but can – when equipped with the appropriate sensor technology – also provide important leads in information with near real-time situational reports, target and impact analyses as well as the monitoring of geographically limited spaces.

The use of the Unmanned Surface Vehicle SeagullTM offers the maritime task force a flexible, quickly available, cost-effective and modular solution in the field of mine countermeasures and submarine hunting. As the systems can act completely autonomously, the number of personnel required and also the individual risk for task forces is reduced over the long term.

In future, UGVs will provide military operations with useful and expandable basic capabilities. Robotic vehicles with a high degree of miniaturisation are at the very beginning of being integrated into ground operations. The UGV Probot illustrates the importance of their integration into a versatile range of deployment tasks.

Elbit Systems Deutschland system solutions enable new capabilities to be integrated into the digital and increasingly networked military environment. Their deployment means that forces can be relieved of the burden of dangerous and time-consuming tasks.