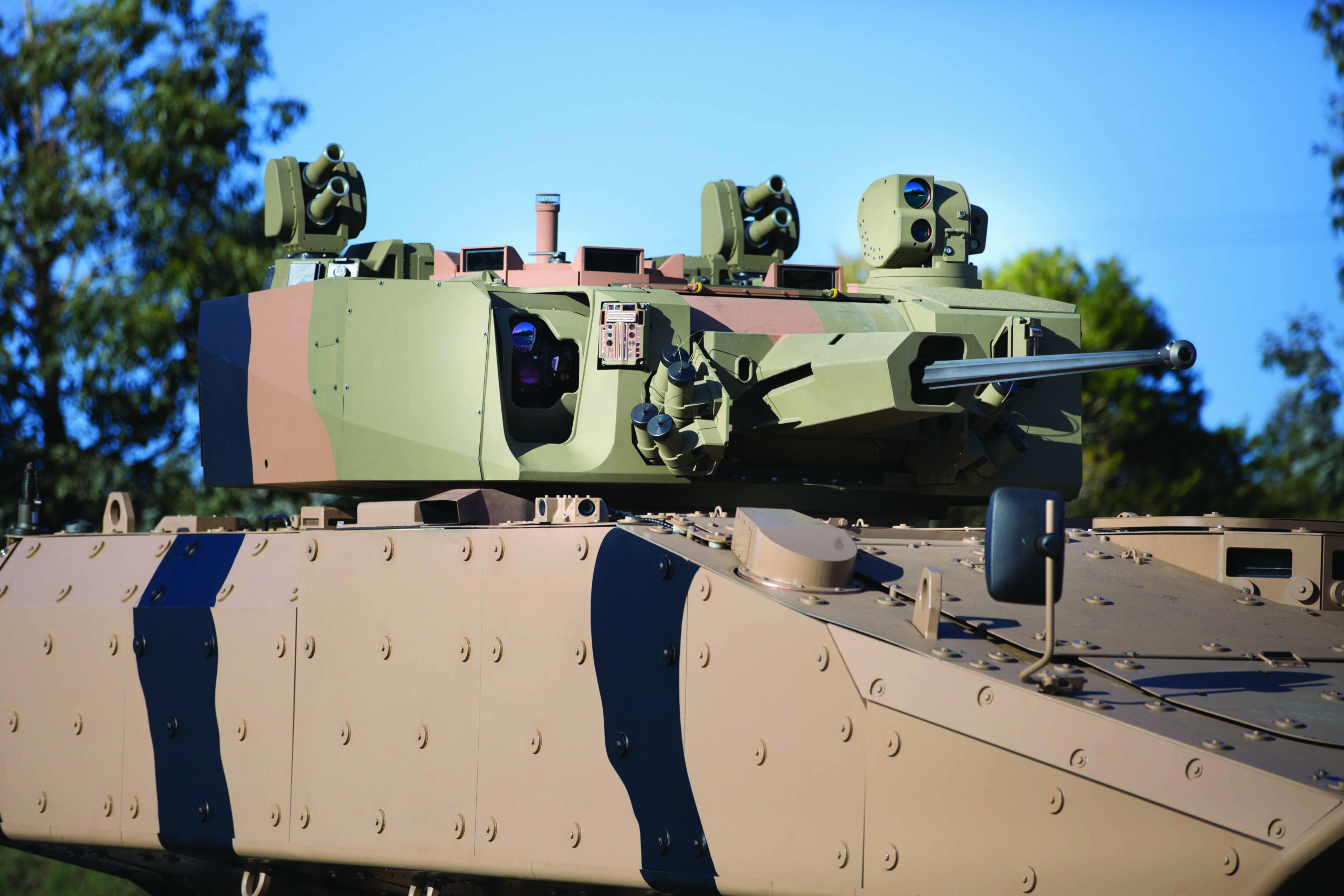 The greatest threat to wheeled and tracked armored vehicles on the modern battlefield comes from anti-tank weapons and directional shaped charge booby-traps. Especially in the urban environment in the context of stabilization operations, land systems cannot take advantage of their mobility and are vulnerable. But the return to national and alliance defense also places new demands on self-protection. In high-intensity combat against an equal opponent who masters the combat of combined arms and can use systems comparable to his own forces, losses of people and material can only be compensated with difficulty. Thus, the ability to survive as a prerequisite for fulfilling one’s own mission continues to be of crucial importance.

The company Elbit Systems Germany offers the protection system for both wheeled and tracked vehicles up to battle tanks IRON FIST at.

IRON FIST has a 360 degree coverage and, compared to other systems available on the market, is characterized by a significantly lower weight and the ability to successfully combat several anti-tank weapons fired in volleys. Is perspective IRON FIST Also suitable for deflecting projectiles with kinetic energy (KE) in combat against battle tank formations and as a measure of anti-aircraft defense for all troops against drones. In addition, the sensors used to detect threats can also be used to display the vehicle’s surroundings in various assistance systems. IRON FIST thus has an overlap with Iron Vision, that a combat vehicle can appear “glassy” for the crew fighting under hatch and the need for the commander to have to lead over hatch in a battle is reduced. In the last point, we benefit from the experience of our Israeli parent company in the field of protection and flight assistance systems for aircraft crews.

IRON FIST uses two types of sensors with which it “scans” the environment for approaching threats. Radar and passive infrared sensors ensure all-round reconnaissance. Missile heads approaching are detected in a fraction of a second, the launcher is aligned accordingly and the trajectory of the effector for defense is calculated. This is fired and implemented next to the warhead or the KE arrow. The threat is rendered harmless by the fragmentation effect or the pressure wave, or else it is decisively deflected so that the bullet can no longer penetrate the armor. The distance-active “hard-kill” protection system is supplemented by “soft-kill” capabilities, such as dazzling IR search heads.

IRON FIST is compact, modular and light and is therefore particularly suitable for integration on wheeled vehicles and armored personnel carriers. Depending on the shape and size of the vehicle, the appropriate number of sensors and launchers are installed for countermeasures. The mechanical integration is less invasive than with other distance-active systems. Due to the many advantages, the Netherlands decided to scaffold in 2019 IRON FIST as part of their CV90 modernization.

For the US Army, integration work is in progress on the BRADLEY armored personnel carrier, while phase 3 is in phase 3 for the Australian army program LAND 400 IRON FIST the protection system for both competing providers and also the equipment on the BOXER CRV (LAND 400 phase 2), a distance-active hard-kill protection system is now required. This program in particular has a direct connection to the German procurement project “Schwerer Waffträger Infanterie”, a BOXER with a manned medium-caliber turret. This project is the focal point for the fulfillment of NATO demands on the German army to keep so-called “medium forces” available.

The distance-active protection system IRON FIST can be supplemented by a number of passive protection systems. For this purpose, Elbit Systems Germany offers a comprehensive portfolio of different laser warnings for land systems. What they all have in common is that they audiovisually warn the crew of laser and radar-based threats and thus create the conditions for successful countermeasures.

Elbit’s laser warning system (E-LAWS) and Threat Detection System (TDS) recognizes, categorizes and localizes laser sources such as rangefinders, target markers, “beam riders”, “gated imaging” and infrared illuminators, regardless of whether these are used against one’s own forces on the basis of air or land. In addition, the Multi Threat Detection System (MTDS) also clarify, categorize and locate sources based on radar and radio frequency.

E-LAWS, TDS and MTDS can also be easily integrated as “stand-alone” solutions by platform manufacturers. They are characterized by high accuracy and low error rates, have been field-tested and are used by numerous armed forces. The Bundeswehr has also requested a laser warner for a BOXER program.

At the beginning of September, the Bundeswehr ended the military evacuation operation from Afghanistan / Kabul. Only Airbus A400M aircraft were used for the German flights to and from Kabul. In order to cope with future operations of this or a similar type in terms of protecting the crew as well as the evacuated people, part of the A400M fleet will be equipped with the modern self-protection system DIRCM (Direct InfraRed Counter Measurement).

The DIRCM system offers the highest chances of survival against incoming threats such as infrared guided anti-aircraft missiles.

The centerpiece is the Triple Turret J-MUSIC (Multi Spectral Infrared Countermeasure) system from Elbit Systems. Together with Diehl Defense GmbH & Co. KG and Airbus Defense and Space, part of the A400M fleet will be equipped over the next few years. J-MUSIC uses state-of-the-art IR laser technology to ensure the protection of aircraft against surface-to-air IR missiles.

The Elbit Systems Mini-MUSIC system is located in the UH-60 Blackhawk, as well as on the CH-47 Chinook. Elbit sees an application for the German customer in the rotary wing aircraft of the NH 90, as well as in the future heavy transport helicopter (STH). With a weight of 19 kg, there is nothing in the way of integration into a medium-sized helicopter in terms of weight and dimensions.

When used on a fixed wing platform, Elbit Systems sees the integration in the Hercules C130J and on the PEGASUS platform.

The C-MUSIC is a DIRCM system in a pod version, which was installed in passenger and transport aircraft in regular commercial use. All machines of the Israeli airline EL AL are equipped with the C-MUSIC system.
C-MUSIC uses a fiber laser based DIRCM technology that was originally developed for military applications. In addition to protecting military aircraft, it also offers “civil” or government machines a corresponding capability.
So far, C-MUSIC has been certified and integrated for the aircraft types B777, B747, B737, B757, B767, A330 and A320. The C-MUSIC system has so far successfully proven more than 200,000 operating hours on the platforms mentioned.

J-MUSIC is a variant of the DIRCM system that has been optimized for the protection of large aircraft, including transport aircraft, tanker aircraft, special operations platforms and business jets. As an integrated DIRCM system, it can be installed on a variety of aircraft types with up to three search heads.