» Home » Probot, a flexible platform to support the infantry 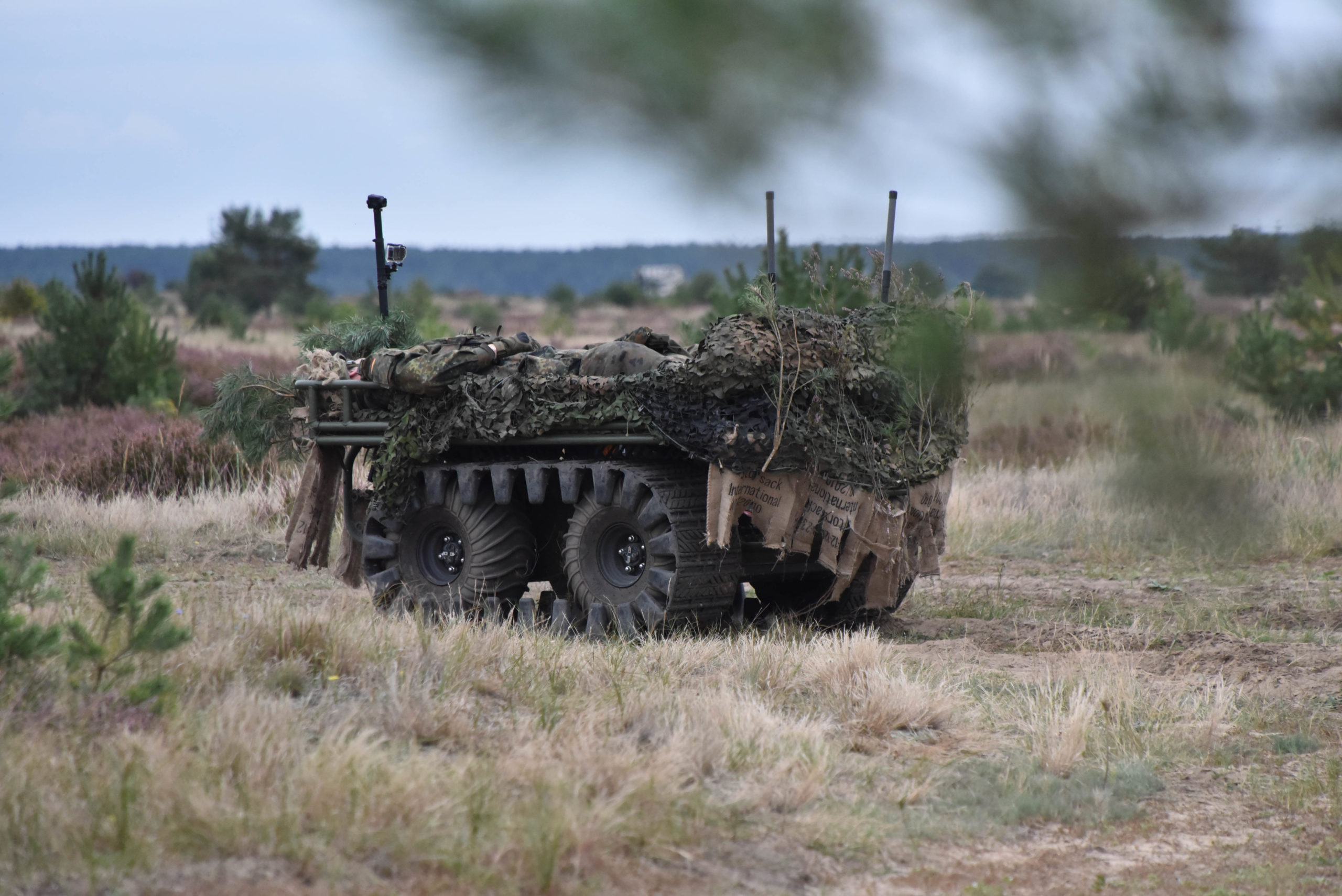 Probot, a flexible platform to support the infantry

The German Armed Forces have conducted a field test of unmanned ground vehicles (UGVs). The Office of Army Development, together with the Fraunhofer Institute FKIE, was in charge of the Research & technology (R&T) study “Unmanned Ground Vehicles in Support of Dismounted Forces”. The office also received support from the infantrymen of the 6th Company of the MoD Guard Battalion and the BAAINBw (German Procurement Office). The field tests were conducted at the Jägerbrück military training area in Torgelow, Germany.

Within the scope of the study, various UGVs were to be tested and evaluated in realistic scenarios. The previous criteria, such as off-road mobility and teleoperation/remote control, were supplemented by the usability of autonomous functions in real-mission scenarios. The highlight was a combat shooting, where the soldiers were supported by the participating UGVs.

Elbit Systems Germany participated again after 2019 with two Probot V2. Our UGV Probot (Professional Robot) is an all-terrain carrier and reconnaissance robot to support dismounted troops and increase their effectiveness. In order to relieve the forces, the Probot is able to transport wounded (up to two stretchers or more while sitting), rucksacks, other loads (e.g. ammunition, spare parts), or be the integrated transport platform for various sensors (electro-optical, CBRN-RECCE, electronic warfare (EW)) for reconnaissance missions. In the current test, in addition to normal loads, the Heckler & Koch Grenade Machine Gun (GMG) of the heavy infantry platoon were transported.

Direct use of the GMG from the Probot is also conceivable, but was not tested in live fire this time. The concept of operations (CONOPS) envisages that the Probot can transport smaller UGVs or unmanned aerial vehicles (UAVs) to a target area to conduct reconnaissance missions and significantly extend their range. The Probot can also be used for command posts as a relay station to increase range and stand-off capability.

During the R&T study, the Probot demonstrated its capabilities as a flexible cargo mule. In addition to off-road capabilities and teleoperated mobility, the soldiers were able to get a first-hand impression of the practical suitability of the autonomous “Follow-Me” and waypoint navigation functions, for example for logistics and medical evacuation (MedEvac) operations. It is also possible to use several Probot in a convoy. High flexibility is an important factor for all operations. In addition, the Probot stood out above all because of its low entry barrier. Thus, no long training of the infantryman is necessary for its use. The system is intuitive and has a high degree of user-friendliness/usability. Due to the electric drive, which allows operation for up to 24 hours, the acoustic and thermal signature is extremely low. This makes enemy reconnaissance more difficult.

Thanks to its compact dimensions (H/W/L: 195x133x112 cm), the Probot can be used both indoors and in open terrain. The vehicle weighs 435 kg and can carry a maximum payload of 750 kg. Probot is highly mobile and can cross different types of terrain such as sand, water, thickets, boulders and obstacles, the environment protection is IP67. To increase off-road mobility, the 4×4 vehicle can be equipped with a rubber track set. The maximum speed is 12 km/h. A 48 V battery according to military standards is used for power supply. In line-of-sight operation, the range is 1,500 m. In addition to a GPS, the vehicle is equipped with day/night cameras for 360° all-round vision, including a zoom function, these can also record for reconnaissance purposes. A 360° near-infrared (NIR) illumination is installed as support. Communication is via a secure mobile IP ad hoc network with mesh data connection. Control and set-up is done via a Ruggedised Operator Control Unit (ROCU-7). ROCU-7 has a weight of 2.3 kg and can operate all types of unmanned vehicles – air, land, sea – and can also be used in night vision mode.