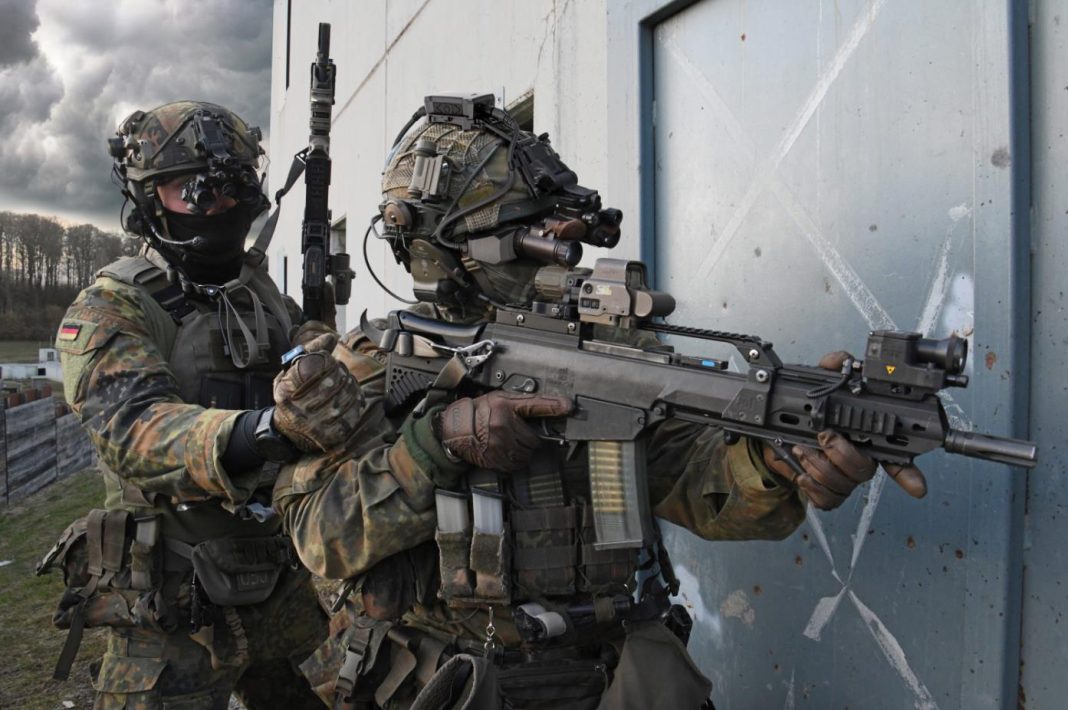 Information Superiority and Combat Value to Increase Thanks to Augmented Reality

For a long time it was called „own the night“. Thanks to night vision technology, better equipped armed forces were at an advantage on the battlefield. So, operations have been and are being carried out at night. This is particularly true for Special Forces. Nowadays, other military and paramilitary forces do have access to night vision technology. For creating information superiority on the battlefield, electro-optical systems and modern communications technology are essential. This involves all relevant and available information that must be shared in time with the appropriate user.

Assessment of the Situation and Representation in Real Time

Today, military operations are being conducted in complex operating spectra and in a wide range of operational environments – day and night. With the use of Augmented Reality (AR), infantry forces will be able to gain and process information quickly.

A typical scenario: An airborne platoon is on patrol in its area of operations. The command is to search two houses in a nearby village where there may be workshops for IEDs (Improvised Explosive Devices), according to expectations. To support this operation, another infantry platoon is about to join the airborne platoon. But where are exactly the objects, which line of motion takes the other platoon? The platoon leader orders to stop any action, first looking at the map and assuring via radio that the correct objects have been identified. Following this, the platoons move into the village, securing house to house – the visual connection and so direct communication is almost constantly interrupted by obstacles. In this situation, communication and both direct agreements and information sharing are essential: Who is where? Just not to confound a comrade with an opponent. Where exactly is the target? Even the platoon leader no longer has all his soldiers in his sights. Due to the noise discipline, the soldiers will not use voice communication over the last metres.

Modern armed forces are to expand the range of infantry capabilities by utilizing so-called Soldier Systems like the „Infanterist of the Future“ (IdZ) in Germany or the „Bewed Operationeel Soldaat Systeem“ (VOSS) in the Netherlands. They enable additional skills in the fields of intelligence, leadership and impact. As to the IdZ, control of systems and information are feasible via the BAG operating and display device (in German: Bedien- und Anzeigenerät). In doing so, the soldier looks into an ocular to receive information and turns his gaze with it from what happened in front of him.

Back to the airborne platoon: A look at the BAG is not possible, it would not be able to secure the comrades for seconds. In exactly this situation, the XACTse data display shows its advantages. Central to this is „Advanced Reality“, which is the interaction of digital and analogue data. The user sees reality as he sees through glasses or the camera of his smartphone. The picture is added with additional information, which is displayed and complements the real image. This is how the user receives additional, mission-critical information while he is observing the terrain.

The solutions from Elbit Systems Deutschland meet exactly this demand – from across all networked troop branches up to the individual soldier. They convince by their interoperability and ensure a superior assessment and presentation of the situation. We draw on many years of experience and on our products in the fields of night vision, communication and sensors for dismounted forces. They can be fully integrated in C4I systems. And the systems function independently from an existing infrastructure.

Our XACTse HUD enables the direct presentation and fade-in of tactical information in the soldier‘s field of view. For example, when receiving information, he must never take the look from a target or the battlefield. Data for navigation and orientation, including the own position, north, direction of bearing and direction of view, can be faded in the XACTse HUD. While approaching their target, the paratroopers receive information on their own position, as well as the distance and location to the target. Disorientation during their movement is thus avoided. The own forces – together with distance information – are displayed in the field of vision by tactical symbols, including Blue Force Tracking.

Mission-critical information or changes can be mirrored directly into the field of view, which promises a decisive increase in combat value, without to overwhelm the soldier by a flood of information.

The display of tactical AR symbols on the XACTse‘s HD colour display helps the soldier transmit the relevant information in a personalized way in real time. In this way, the selection of information can be individually tailored to the needs of the soldiers.

The individual shooter receives a different representation than the squad, group or platoon leader. The XACTse HUD can be used as a stand-alone device at daylight or in combination with a night vision goggle for night operations. The system is extremely compact, lightweight and thus enables a long and non-complaint-free wearing time.

The paratroopers on the move are grateful for every gram that can be saved. Besides the equipment, in particular, consumer goods such as water and ammunition must be carried by them. Therefore, the soldiers appreciate especially small and light equipment, which at any time offers full performance.

The XACTse HUD consists of both an electronic unit and a tactical optical auxiliary unit, the latter of which is carried in front of the eyes. The power supply is externally connected via a 9-16-Volt connection, a 5-Volt USB port or a 3.6-Volt lithium-ion battery. The storage of data, such as images or videos, is possible up to 64 GB. The cable-free data transmission is carried out via WiFi and Bluetooth. Also integrated are integral sensors, namely a GPS transmitter, a digital compass, as well as a light sensor. The latter automatically adjusts the representations to the ambient brightness. Thanks to GPS and compass, the infantryman knows at any time where he is located – even if buildings or difficult surface terrain obstruct his view.

XACTse is interoperable with night vision optics that connect a 16-mm or 18-mm tube. For mounting on the current image amplifier glasses of the Bundeswehr, the XACT nv33, no tool is required. The XACTse HUD can be easily attached to the helmet or head support masks. With its AR functions, the XACTse offers a simple and intuitive methodology to provide the soldier at any time with the necessary information. Its compactness and the low weight makes legacy systems lighter – by several kilogrammes. Units that were not previously equipped with a soldier system will receive a simple and uncomplicated, but significant increase in combat value.

Back to the operational scenario: The operations centre in the field quickly provided the paratroopers with the most important information on the new situation, which is thanks to the XACTse and the AR technology used in it. The infantry forces were able to react immediately by using the updated situational picture. This led to the capture of suspects in the two workshops before they could evade. The XACTse HUD, in combination with its AR technology, provides the soldiers with a tool with which they receive critical information and the situational picture without overloading them with information. Besides the speed of the transmission of information is, above all, the fact that the infantry never takes the view from the battlefield.

To original article
About Us